Many years ago, a neighbor asked David's then five-year-old son, what his dad did for a living.  Since his son had only seen his dad working on pottery in his garage studio, David's son said he was an attorney and that attorneys make pottery.  Actually, his son was right- David works with pottery and is a partner with the law firm of Varner and Brandt in Riverside, California.  He has been a civil trial attorney for the past 30 years.  His current litigation practice is on behalf of a major local retail company.  He is admitted to practice before all courts in California.

David works at his home studio that has developed in to a destination for other potters.  The studio has six potters wheels in the throwing area where 12 other potters join him for a pottery workshop multiple times weekly.  There is a separate glaze studio and an exterior kiln area with three gas kilns.  The development of the studio has resulted in an invigoration of creative energy.  He is currently exploring the world of wood-fire firing.

Handthrown. One of a kind. 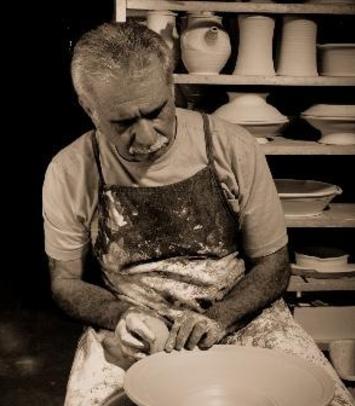 David Porras' love for pottery began while studying under Robert Karlinsey at Loyola University and then while studying under Neil Moss at El Camino College.  He improved his throwing skills working as a production potter at factories in Carson and Santa Monica.  Then he had his own retail pottery studio in Playa del Rey, making and selling functional stoneware.